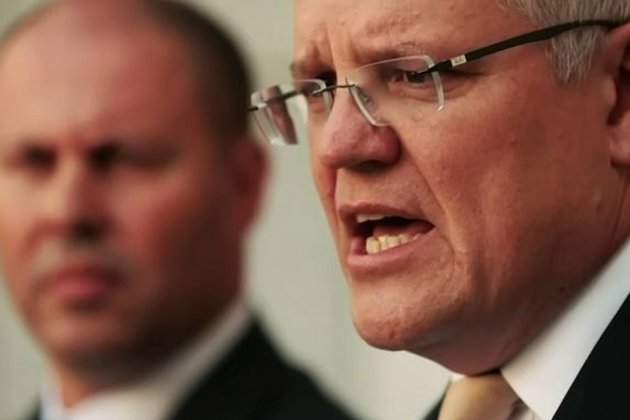 A Liberal history of irresponsible economics

We’ve been told ad nauseum, “It won’t be easy under Albanese”. But Sam Leckie asks, how much better will it be under Morrison and Frydenberg?

AS THE GAP in the polls widened in the week leading up to the Election, a reformed Prime Minister Scott Morrison faced the media to acknowledge that he had been a “bulldozer” in the past – assuring voters he could change. This seems a far cry from the apparent reluctance of voters to change governments which he asserted on 10 April.

We know that the economic aptitude of both major parties has been of paramount concern during this Election and the L-NP seems more dogmatic than ever on that issue in particular. The slogan ‘a strong economy – a stronger future‘ comes to mind. Or perhaps the earworm of a TV ad to the tune of ‘There’s a Hole in my Bucket’.

With that in mind, I’d like to take a look at this Government’s history of responsible economics.

Sounds delicious, right? That’s because it is – for the Coalition and its constituent allies. Not for the productive development of the nation. The process of funnelling public funds into electorates of interest in order to hold them in elections would come under immense scrutiny by a federal anti-corruption commission, but that’s a story for another day.

Pork barrelling controversies have been well documented, but here are some of my favourites.

12 reasons why the Morrison Government should be ‘toast’

Unless the self-proclaimed “fixer” Prime Minister actually fixes the election, the chances of a Morrison Government being returned on Saturday appear slim.

Flood and fire relief: During the floods of early 2022, disaster payments for flood relief in Northern New South Wales were directed to the Nationals-held electorate of Page with affected victims in Lismore and the Clarence Valley being provided support during the crisis. Just up the road in the Labor-held seat of Richmond, affected families in Tweed, Ballina and the Byron Shire were left with nothing.

This followed the controversy of the funding provided to bushfire ravished areas in 2019-20, where Labor seat Macquarie – estimated to have lost 80% of the Blue Mountains heritage area and accruing $66 million in losses as a direct result of the bushfire crisis – received nothing in bushfire grants. Liberal electorate Hawkesbury – with an economic impact half that of Macquarie – received $4 million in pork-barrelled funds for economic recovery.

Sports rorts: In the background of an unprecedented global pandemic, which saw job losses to the tune of 700,000, an $100 million sports development project was underway. Over 70% of those funds went to projects not officially approved in Sports Australia‘s review process, with those public funds being funnelled into Coalition-held and marginal Labor seats.

Community Development Grants: The CDG programme which was extended from 2020 to 2026 – the course of two more federal elections than originally planned – carried a public fund cost of $2.5 billion. In 2019, the first year of the programme, 75.5% of the grant money was donated to Coalition seats and just 19.9% to Labor. The Labor grant money averaged $1.25 million less than Liberal seats, with 22 electorates receiving nothing from the Federal Government’s pockets.

Scott Morrison promises change as he continues to bulldoze us

Scott Morrison has promised change if re-elected after bulldozing Australia to ruin over the last three years.

French submarine saga: To add to the fallout of a less than desirable appearance from Morrison at the COP26 climate summit, a previously agreed upon submarine deal with the French Government was – excuse the pun – blown out of the water. A $55 billion deal with Paris to purchase and manufacture Barracuda submarines for the Australian military was ripped up in favour of a nuclear submarine alliance with the United States and the United Kingdom.

Not only did Scott Morrison mislead his French counterpart, President Emmanuel Macron, but the settlement of the cancelled deal is estimated to be costing $5.5 billion in public funds. The cost of the AUKUS alliance deal for nuclear submarines will cost between $70 billion and $171 billion, and won’t be operational to defend Australians from the existential threat of the East until at least 2040. A simple question remains – is this a responsible use of taxpayer money?

Robodebt: Scott Morrison’s first attack on the economy of Australia came before his prime ministership, during his 2015 tenure as Social Services Minister. The Robodebt scheme removed the human element of welfare repayments and produced $1.76 billion in debts for welfare applicants under the new system.

These unlawful debts consequentially created significant financial and personal distress for over 400,000 unemployed people seeking work and led to the suicide of Jarrad Madgwick in 2019. As well as enforcing the already rising cost of living pressures during that time, the Coalition has had to repay $1.8 billion in compensation and legal costs to the victims of the Robodebt scheme, ending an embarrassing chapter in the history of the Government’s public service.

‘Bulldozer’ Morrison: Can he fix it? No, he can’t!

Is Scott Morrison so delusional, so out of touch with reality, that he actually believes some of the nonsense he says?

Super for houses scheme: If the Coalition is re-elected, first home buyers may be forced to choose between a struggle to enter the property market at 30 or risking poverty in retirement. The pandemic already saw a Coalition attack on retirement funds for the Australian labour force, setting 3 million people back up to $20,000 of their superannuation to alleviate the living pressures of COVID-19.

These types of policies, while perhaps a good short-term solution, put unnecessary pressure on consumers to recontribute or risk a poor living standard after their time in the workforce is up. The Frydenberg-Morrison alliance’s latest super-based policy allows eligible members to withdraw a $50,000 deposit from their superannuation fund to put down a house deposit.

Instead of sustainable infrastructure projects to benefit the general public, the Coalition has once again put pressure on consumers which will drive already exorbitant house prices higher, to the great detriment of homeowners and those looking to buy.

Among these failings of Coalition economic policy was the $60 billion abyss left by the COVID-19 JobKeeper package, which failed to encompass a huge number of individuals left jobless or without work and income during the early stages of the pandemic.

At the time of writing, Labor has not yet published the total costs of their election policies. Despite this, an emphasis on increased quality of investment over decreased government spending from Anthony Albanese and Shadow Treasurer Jim Chalmers has great potential to reform a lethargic period in Australian economic policy on climate, quality of life, Indigenous affairs, disability and aged care support networks and the public health sector.

There may be a hole in Labor’s bucket, but Morrison said it himself – people can change, and so can governments.

Sam Leckie is a keen follower of sports, politics and economics. He is currently in his second year of an undergraduate degree in Journalism at the University of Queensland, majoring in Political Science and Peace and Conflict Studies.