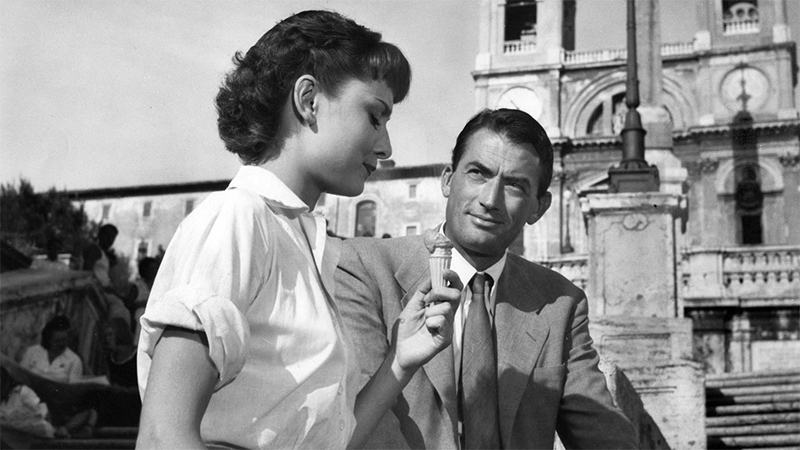 In 1953, nobody knew who Audrey Hepburn was. She had played some minor roles in a handful of movies, but she was, for all intents and purposes, an unknown.

That all changed with the release of Roman Holiday, William Wyler’s lighthearted Cinderella-story-in-reverse in which a young princess escapes her royal obligations for a day in order to live life free from constraints. Hepburn’s being cast as Princess Ann was a stroke of genius, and it established her star persona and won her an Oscar. In a word, she is delightful, commanding the camera’s gaze from the first moment we see her, but always remaining human and approachable. Hepburn’s fragile screen beauty is legendary, but what makes her so attractive (particularly in this role) is how she projects a core of inner strength that is constantly at odds with an intense vulnerability. Hepburn’s Princess Ann is a strong-willed young woman who nonetheless projects a kind of quiet sadness from having lived her entire life being overseen and restricted’”she’s never really lived, which is what she aims to do during her brief bit of freedom.

As the title suggests, Roman Holiday takes place in Rome (the film was shot entirely on location, and it has an open, bustling sense of aliveness that most studio-bound Hollywood films of the 1950s don’t) over the course of a 24-hour period. The early scenes establish Princess Ann’s dissatisfaction with her pampered and cloistered lifestyle. She escapes into the night where she winds up meeting Joe Bradley (Gregory Peck), an American News Service correspondent. At first, he doesn’t know who she is, but once he does, he realizes that he has the biggest news scoop in Rome’”the feisty young princess, who has been reported ill in the media, is actually out ‘œslumming it’ with the locals. (Although it is left intentionally vague as to what country Ann is from, the media speculation and intense interest in her life is reflective of the worldwide fascination with the British Royals.)

In a way, the basic plot here closely reflects Frank Capra’s It Happened One Night (1934), in which the cynical newspaperman accompanies a wealthy young woman who has ‘œescaped’ from her life and wants to get a great story out of it, but ends up falling in love with her instead. This is precisely what happens in Roman Holiday, and while hardly original, the movie elicits a sense of deep joy in the subtle development of Ann and Joe’s love. It is pure romantic froth, developing over a single day and destined for the kind of bittersweet ending that leaves you teary-eyed and wishing for more.

Director William Wyler, who has worked primarily in dramas for the previous two decades (he had already won two Oscars, one for 1942’s Mrs. Miniver and one for 1946’s The Best Years of Our Lives), finds his comical stride early on, giving Roman Holiday a lighthearted, easy-going rhythm. One might say that not a lot happens in the film, but that doesn’t really matter because what is truly of importance is not what happens, but how it happens. The romance between Joe and Ann is, of course, the central focus, but Wyler also develops a good rapport between Joe and his friend Irving (Eddie Albert), a news photographer who goes along for the ride. Some of the movie’s funniest moments involve Joe desperately trying to keep Irving from saying something he shouldn’t by spilling water on him, tripping him, or knocking over his chair. These are moments of slapstick that fit surprisingly well with the film’s overall easy-going rhythms.

But, in the end, it is the stolen looks between Peck and Hepburn, the small moments of physical contact between them, and, finally, Peck’s bittersweet walk down a long, empty corridor at the end of the movie that we remember. The final moments of Roman Holiday are among the most moving and memorable of any romantic comedy I can think of because they get right to the heart of the joys and pains of unrequited love.

COMMENTS
The original negative for Roman Holiday, due to Italian processing standards in the 1950s, was so fragile that it could not be restored directly, so Paramount made a dupe negative for 2K scanning and digital restoration. The resulting high-definition image is very nearly pristine’”sharp, well-detailed, and clear, it is also completely free of any dust, dirt, or debris. Unlike the previously available DVD, digital restoration has not unnaturally smoothed the image, but rather maintained a natural, authentic grain structure that looks very good in motion. Contrast and black levels look good and consistent, another improvement from the old DVD. The Dolby TrueHD monaural soundtrack is almost completely free of any ambient hiss, and the dialogue and musical track sound clean and pleasant. Most of the supplements included here have been repackaged from the 2002 ‘œCentennial Edition’ DVD, although we do get a new 7-minute ‘œFilmmaker Focus: Leonard Maltin on Roman Holiday‘ featurette in which the renowned film critic and historian talks about the film’s unique charms, from Hepburn’s performance to the location work in Roman. Other featurettes include ‘œBehind the Gates: Costumes’ (5 min.), in which Paramount archivist Randall Thropp shows us several costumes housed in the Paramount Costume Collection; ‘œRome With a Princess’ (9 min.), which compares famous sites in then-present-day Rome with various postcards, archival footage, and film clips; ‘œAudrey Hepburn: The Paramount Years’ (30 min.), a substantial short documentary about Hepburn’s life and career; ‘œDalton Trumbo: From A-List to Blacklist’ (12 min.), a too-short featurette about the blacklisted screenwriter and the fight to restore his credits; ‘œParamount in the ’50s’ (10 min.), a fairly thin recap of Paramount’s most memorable films from that era; and ‘œRemembering Audrey’ (12 min.), in which Hepburn’s son, Sean Hepburn Ferrer, and her companion, Robert Wolders, reminisce about her life and career. Also on the disc are an original theatrical teaser trailer, an original theatrical trailer, and a theatrical re-release trailer, as well as a stills gallery divided into ‘œProduction,’ ‘œThe Movie,’ ‘œPublicity,’ and ‘œThe Premiere.’