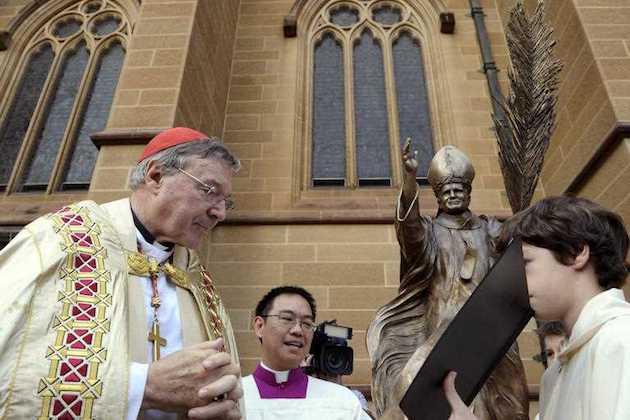 Pell on steps greeting parishioners at time of alleged abuse

A the High Court of Australia appeal into the conviction of Cardinal George Pell nears, Chris Friel takes a look at facts that in all likelihood should have prevented the case ever going to trial.

This is not so much an argument but an interpretation of the state of the question regarding Pell’s so-called alibi, he writes.

Pell’s Master of Ceremonies Charles Portelli testified that he was on the steps of the Cathedral after Mass for about ten minutes or more to meet and greet parishioners with Pell. Because the time of the alleged assault was precisely defined it seems now as though the Crown limit that window from five to ten minutes after Mass there was just no opportunity for him to offend. In other words, Pell had an alibi.

As I understand the dissent, the significance of an alibi is that once raised, the prosecution must destroy it (686, 949). The prosecution carries the burden of proof, and an alibi requires those with such a burden to show that it cannot be sustained. It’s not enough to show that that the alibi is destroyed on the balance of probabilities, but rather to show beyond reasonable doubt that it is. Even the reasonable possibility of an alibi, unrebutted, suffices. This is why Portelli’s testimony that he was on the steps with Pell is so important.

Portelli’s honesty was not impugned by the Crown, and so even if the jury took a cynical view of the Monsignor covering for the Archbishop they were not entitled to disregard it. Portelli’s memory, however, was questioned as he could not recall who the altar servers were in December 1996, nor whether the procession was internal or external.

Portelli did concede the possibility that the practice of meet and greet might not be absolutely invariable, but evidence from Choirmaster Brother Peter Finnigan (who retired that Christmas but who could recall the practice in place before that) was noted by Justice Mark Weinberg as “convincing” and of “considerable significance.” (561, 706, 1090, n. 146 and see also n. 199).

Given that we are talking of just two masses in December 1996, for a practice already established this means that in effect it was operative on those days. Moreover, Portelli claimed these days were “special” (as Pell was new to the Cathedral which had been under repair, and these were the first occasions when Portelli had accompanied him, and as well, when parishioners could meet the Archbishop) so that he definitely recalled meeting and greeting on these occasions (248, 265, 672, 687 and see 507).

For reasons such as these Weinberg clearly agrees with Pell’s Senior Counsel Bret Walker that Portelli cannot be “put to one side.”i (1083)

The Crown, however, do little more than repeat the reservations about memory mentioned by the majority.ii The Crown mentions paragraphs (11, 16-18 and 20 but see also 15, 33, 35-38, 40, 48, 51) of Bret Walker’s submission in which the alibi evidence is copiously marshalled, iii but do virtually nothing to counter it except to offer some contradictions from hostile witnesses.iv I will bring this discussion to a close by remarking simply that Walker obviously regards the steps alibi as a significant factor in this case.

(The writer Doctor Chris Friel taught maths for many years before undertaking, first, a masters in Philosophy, and second, doctoral research on value and credibility in the thought of Bernard Lonergan. In 2018 he investigated at length the “purposely timed hysteria” of the pro-Israel hawks in the UK amidst the antisemitism crisis, and commencing in 2019 has devoted an equally lengthy exploration of the Cardinal George Pell case and its context).

The Pell case – “Having reviewed the whole of the evidence…”

A Critique of Ferguson and Maxwell

How the Interview Changed the Story

Cardinal George Pell learned of charges against him in Rome Interview

Related story: High Court of Appeal in Australia to review conviction of Cardinal