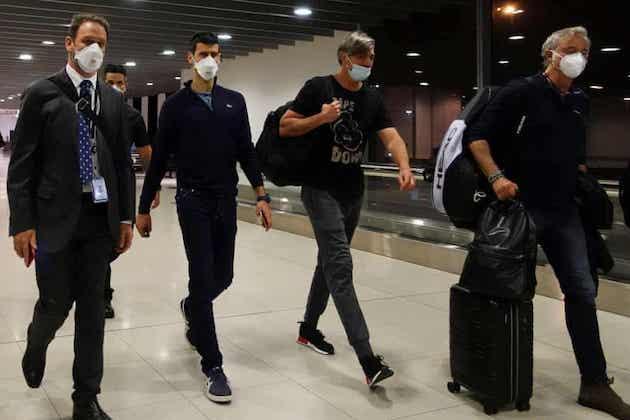 Not since the 1936 Olympics in Berlin has a government tried to prevent an athlete from competing in a sporting event because of his race, religion, or beliefs.

On Friday, the Australian government revoked the visa granted under official protocols to Novak Djokovic, which had been illegally canceled a week earlier, and reinstated by the Federal circuit court of Australia, ordering his forcible removal from Australia, and banning him from revisiting for three years.

Indeed, lawyers acting for the Australian government last Monday advised the court when it quashed the cancellation and ordered the release of Novak Djokovic within 30 minutes, that the Minister for Immigration, Alex Hawke, could still exercise his right to personally cancel the visa. Not too many people thought that would happen.

Djokovic is the World’s No. 1 tennis player, and the star attraction for the Australian Open which kicks off in Melbourne on Monday. It was the player’s opportunity to notch up twenty-one Grand Slam wins that would have made him the best tennis player ever.

On Friday night, well after Monday’s comprehensive win by Djokovic in the federal court, Hawke announced he was using his personal prerogative to cancel his visa notwithstanding the Federal court ruling.

The Djokovic legal team had only hours to file an application, with the Australian Open scheduled to commence on Monday. The Federal Court convened a hearing on Saturday morning at 10:30am at which time the Djokovic team was given one-and-a-half hours to file its submissions. The Australian government was then given 10 hours to provide its response.

At 9:30am on Sunday the parties convened before the full Federal court, 3 judges, including the chief justice. This was not however a hearing about justice or fairness, it was not a case to be considered on its merits. The immigration minister had acted pursuant to a law that gave him sweeping powers to eject any person from Australia, regardless of his reasons.

The chief advocate of the Australian government’s team, Stephen Lloyd, made this clear. The legislation did not require the minister to give his reasons. While the reasons were attacked by Djokovis’s lawyers as “irrational,” “Illogical,” and “unreasonable,” in the end it didn’t matter whether they were or weren’t. The judges could only rule on whether the minister had acted within the law in making the decision.

The actual law the minister operated under makes it clear that the minister has the discretion to cancel a visa under any circumstances, without regard to fairness or justice. In other words, “the rules of natural justice do not apply.”

The law was likely enacted to enable the minister to cancel visas of alleged terrorists, not tennis players. However, it has been used in this case.

Australians are reportedly rejoicing over the decision. A headline in the New York Times reads ‘Novak Djokovis got the boot. Australians are thrilled.”

The Sun in the UK’s lead story was headlined ‘And Stay Out!‘

Many have expressed shame at their fellow Australians, and the government, headed by Prime Minister Scott Morrison.

The popularity of the decision likely emboldens the government in having made it, however, it is a shallow victory for the government, and shows up Australians in a poor light.

As the minister for immigration conceded in his submissions, Djokovic’s application to enter the country was perfectly in order, the medical exemption he obtained, determined by medical experts, was perfectly valid. The minister conceded the Australian Border Force’s action in quashing the visa was not lawful, and he agreed with the quashing of the decision by the Federal court of Australia.

Mr Hawke, in his submissions also conceded Djokovic was not a risk to Australia, the chances of him spreading the virus was “negligible.”

Djokovic is not an ‘anti-vaxxer.’ He has not been on the record advocating against vaccines, has not encouraged people not to take vaccines, in fact, has kept his own personal views to himself. Whilst the Australian government claimed ‘his anti-vaccine views were well known,’ the only support they had for that claim was a view he expressed in an interview to the BBC nearly two years ago, in April 2020. What the minister did not say in his submissions was that besides saying he wanted to have the option of what goes into his body, he was not a medical expert and was keeping an open mind (on vaccines).

The cynical move by Scott Morrison’s government and Mr Hawke will have major repercussions. While the hosting of the Australian Open is probably not at risk, Australia’s and Melbourne’s reputations in hosting international events will be diminished. Mr Hawke said he took such things into consideration. He said he considered the consequences of the decision. Nowhere however did he outline the ramifications for Djokovic.

The World’s No. 1 is aged 34 to 35 and is on the brink of becoming the world’s best-ever tennis player. He may well be denied that not because of performance, but because of a political decision. Not a decision made in the public interest, to preserve order, as Mr Hawke has claimed, but because of the aspirations of Mr Hawke’s party to be re-elected. Aside from the cost to the sport of tennis, the Australian Open, and all its competitors, Melbourne as a host city, and not the least Australia’s reputation, the controversial decision could well well bring about, or advance, the end of Djokopvic’s career.

The way Djokovic has been treated since winning the first appeal is an utter disgrace, French tennis commentator Carole Bouchard tweeted Sunday.

He is not a threat to Australia. He didnt come here to excite any unvaxxed movement whatsoever. They perfectly know it.”

The extremities theyve gone to avoid losing face are shocking. But for a gov that has prevented its own people from returning to their country during a freaking pandemic, I guess nothing should be surprising anymore.”

Unreal twisting of the law here. Unreal treatment inflicted to their 9-time champion after all he did for the event and the city. Shameful. Dark ages all around, Bouchard said.

The damage to Djokovic is immeasurable, reputationally and financially. Until this past week, he has been a major international sporting brand, with endorsements no doubt worth tens of millions of dollars. The prize money at the Australian Open he has lost the opportunity to compete for. Even if the government had been unsuccessful, which was almost impossible under the way the law has been enacted, Djokovic’s preparation was utterly destroyed by the government’s intervention.

When the winner of the Australian Open is declared, who among us will regard him as the real winner, when the favourite was scratched on the eve of the event, not because he was instilled with a drug – but because he wasn’t?