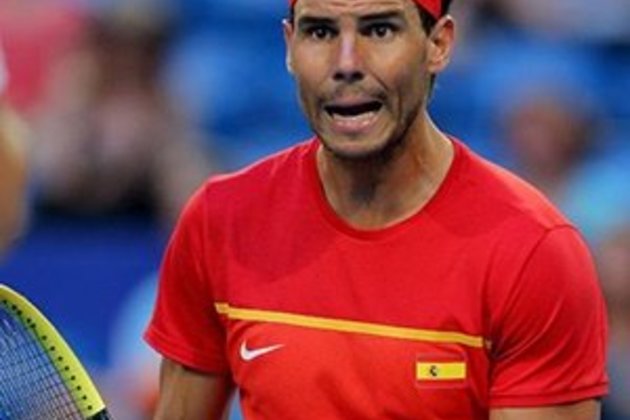 Slovenian qualifier Dalila Jakupovic retired with breathing difficulties, but it was not immediately clear whether her problems were related to the smoggy air.

Players and one prominent coach voiced concern after the sudden deterioration in conditions, following months of deadly bushfires that have engulfed huge swathes of the Australian countryside.

Air quality in Melbourne, habitually ranked as one of the world’s most liveable cities, was among the worst on the planet and described as “hazardous” by city authorities.

Residents “should try to stay indoors, keep windows and doors shut, and keep pets inside”, the City of Melbourne tweeted.

Tennis officials have said there is little chance of the Australian Open being delayed, but that air quality is being monitored and umpires can halt matches to protect players’ health.

“Practice was temporarily suspended this morning due to poor air quality,” organisers said in a statement. “Conditions onsite are improving and are being constantly monitored.”

Alexander Zverev and David Goffin had been due on the Melbourne Park courts first, followed by world number one Rafael Nadal, who was seen arriving at the venue.

“Not the best air quality this morning in #Melbourne,” tweeted Patrick Mouratoglou, Serena Williams’ coach, with a photo of the city shrouded in smog.

The first day of qualifying got underway, slightly later than expected, but there were concerns when Jakupovic, the world number 201, suffered severe coughing and retired when a set up against Switzerland’s Stefanie Voegele.

Elsewhere in Melbourne, Maria Sharapova took to the court as scheduled against Germany’s Laura Siegemund at the Kooyong Classic exhibition tournament.

She is set to be followed by Bulgaria’s Grigor Dimitrov facing Croat Borna Coric.

“The health and safety of the players, spectators and all involved in the Kooyong Classic event is paramount,” said tournament director Peter Johnston.

Australia’s Bureau of Meteorology said there was widespread smoke across central and eastern Victoria state, including Melbourne, which was expected to clear by Wednesday afternoon.

Mandy Minella, the world No 140 from Luxembourg, said she was “shocked” that Australian Open qualifying was allowed to take place.

And America’s Noah Rubin complained that players weren’t being kept up to date, saying .

“It’s unfortunate he missed that announcement for a variety of reasons,” he said, adding that all decisions were made on expert advice.

Tiley last week said it was unlikely that the Grand Slam would be delayed, regardless of the conditions after world number two Novak Djokovic suggested the option should be on the table.

Tiley noted that Melbourne Park has three roofed stadiums and eight other indoor courts, while meteorological and air-quality experts will be on site to monitor conditions.

Any smoke hazards will be treated in a similar way to extreme heat and rain, with umpires able to stop play if it is considered too dangerous to continue.

A small number of sports events have fallen victim to thick smoke since the fires first ignited, including last month’s SOLAS Big Boat Challenge in Sydney and a Big Bash cricket match in Canberra.

But dozens of other sports fixtures have gone ahead.

Sports stars, including leading tennis players, have been quick to respond to the crisis, pledging money to relief efforts.