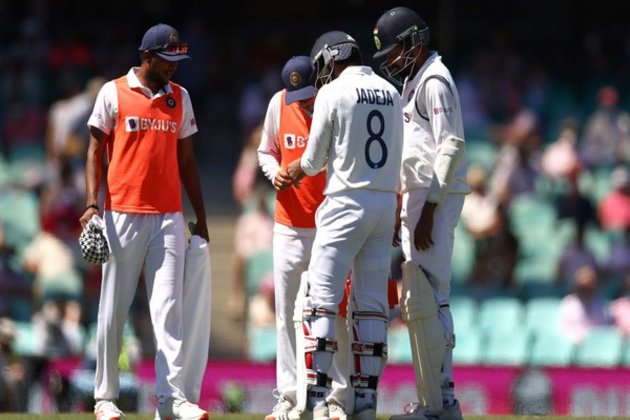 Jadeja to consult in Sydney before returning to India

Sydney [Australia], January 11 (ANI): India all-rounder Ravindra Jadeja, who suffered a blow to his left thumb while batting on day three of the Pink Test against Australia, was on Monday ruled out of the fourth Test.

“Ravindra Jadeja suffered a blow to his left thumb while batting on Day 3 of the third Border-Gavaskar Test that concluded on Monday. He later went for scans and the results have shown that he has dislocated his thumb,” the Board of Control for Cricket in India (BCCI) said in an official statement.

“Jadeja will not be available for the fourth and final Test against Australia to be held in Brisbane from January 15-19 at the Gabba,” it added.

The all-rounder will now consult a hand specialist in Sydney before he returns to India. He will then head to the National Cricket Academy in Bengaluru for further management of his injury.

Earlier ANI had reported that Jadeja suffered a dislocation and fracture and has been ruled out for about six weeks with the management set to check on the need for surgery with a specialist.

Speaking to ANI, sources in the know of developments had said that while the player is out for 6 weeks, a specialist’s opinion will be sought and a call will be taken if he needs surgery.

“He has a dislocation and fracture. He will be out for around 6 weeks and a specialist’s opinion will be taken to check if the all-rounder needs surgery as is the procedure in such cases. A call on his availability for the England series can be taken only after the specialist checks on the thumb,” the source had said.

The third Test of the four-match series between India and Australia ended as a draw on Monday. Ravichandran Ashwin and Hanuma Vihari batted out 258 balls to help India walk away with a draw and head into the final Test at the Gabba, with the series level at 1-1. (ANI)