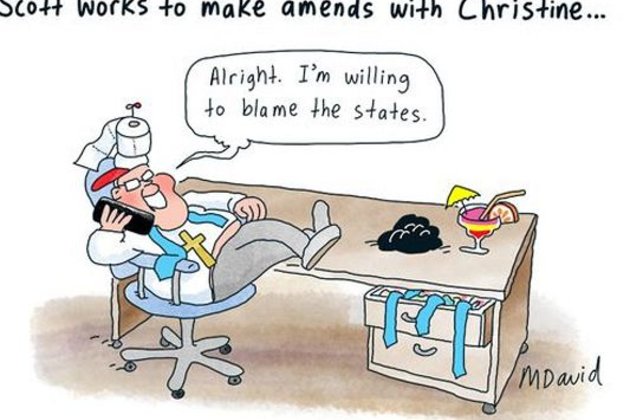 Things haven’t improved for the Morrison Government after the poor management of our vaccine rollout followed by an attack on Christine Holgate, writes John Wren.

AND THE MORRISON sh*t show continues.

A feature of what passes for government in Australia these days is the use of the rolling distraction technique. Each debacle distracts from the one previous to it. It’s kind of like the Gish Gallop interview technique played out on the entire media landscape. Prime Minister Scott Morrison is a master of the Gish Gallop, so this poses no surprise.

For those who have not heard of the Gish Gallop, it is an interview or debating technique where an individual spouts an endless array of dubious facts and statistics, overwhelming their opponent with the sheer volume of nonsense.

This week we saw Morrison’s vaccine rollout disaster culminate with him making an announcement on his Facebook page that he would no long be committing to a dated timeline for the vaccine rollout. This was telling for a number of reasons.

Anybody who has studied management will know that a plan without a date is just a fantasy. But as with all things Morrison does, it’s about controlling the political narrative and his position in it. For most of the second half of last year and certainly all of this year, Morrison has been talking up the vaccine rollout as the key to re-opening the economy. He saw it rightly as an election winning strategy. He would be seen to be riding in on his white charger taking personal responsibility for the vaccine, while riding that wave of public support to the ballot box.

Morrison put all the Government’s eggs in one basket when it committed to the AstraZeneca vaccine being made in Australia under license by CSL as its primary vaccine. It was quite likely that one or more of the vaccines being produced globally would fall over at some point – rare side effects, production issues or low effectivity were possible for all of them.

Most countries mass ordered from several manufacturers to cover themselves if one or more of the vaccines fell over. Morrison’s government did not do this and the AstraZeneca vaccine has now been linked to a very rare blood clotting disorder and is now contra-indicated in Australia for anyone under 50. Some countries, like Denmark, have banned it outright.

New Zealand, for example, ordered 10 million Pfizer doses, 5 million Janssen doses, 10.7 million Novavax doses and 7.6 million AstraZeneca doses for its 4.8 million inhabitants. After the revelations regarding AstraZeneca, New Zealand’s Labour Government simply announced all Kiwis would be getting the Pfizer jab instead.

The other point about Morrison not committing to dates is that he cannot be held accountable when targets are missed. He was hammered for missing the 4 million Australians by end of March deadline – as a result, if he doesn’t give a date, no one can accuse him of missing it. It’s pathetic.

He has also taken to making these announcements on Facebook where he cannot be confronted by awkward questions from journalists as he often is at press conferences (but still not often enough). On Facebook, he can also delete negative comments. It’s all about controlling his image, not vaccinating Australians.

This week, the PM shunned the media and took to social media to defend his Government’s bungled vaccine rollout.

Morrison’s Facebook use is particularly ironic when only a few weeks ago during the Craig Kelly episode, he was rebuking people for getting their vaccine information from Facebook rather than official government channels. His hypocrisy knows few bounds.

But all this was blasted off the front pages by another debacle of Morrison’s own making – the Australia Post/Christine Holgate saga. She fronted Senate Estimates with two supporters all wearing suffragette white. Holgate quite rightly blasted Morrison with both barrels then finished him off with a metaphorical double tap like a professional hitman (or woman, in this case).

What was revealed in Estimates was the Government’s secret plan to privatise Australia Post. This has been an IPA wet dream for years so should not really come as a surprise. It seems Holgate’s crime was to turn the Australia Post business around, making it profitable again when it was expected she would drive it into the ground, giving the Government a reason for selling it off. In other words, she did her job too well.

Holgate, of course, is an exceptionally astute, highly accomplished articulate woman who clearly has more integrity than Morrison (albeit not a high benchmark). She was wrongly dismissed, seemingly constrictively dismissed, in fact. Her integrity impugned under parliamentary privilege (the cowards’s castle) by Morrison for something she did that was entirely legal and within the remit of her job.

Wren’s Week: Morrison’s handling of COVID-19 a series of failures

Among its many failures, the Morrison Government’s handling of the COVID-19 pandemic has been an absolute disgrace.

Holgate was clearly bullied out of her job because she did it too well and she was a woman. Smart, accomplished women are a threat to Morrison. Would a man have been treated as poorly? It’s doubtful.

But talking about the rolling distraction technique, let’s not forget why Holgate was so unfairly thrown under the bus in the first place – Morrison’s sensational and unwarranted attack on her was a deliberate distraction from revelations of the dodgy Leppington Triangle land acquisition for the new Western Sydney airport. Remember that? Where a Liberal Party benefactor was paid tenfold the market price for a piece of land necessary for the airport’s construction. Clearly corrupt, but again blasted off the front page effectively by the Holgate story.

So where does this all leave Australia? We are largely still unvaccinated. No one knows or can tell us when we will all be vaccinated. We still can’t travel overseas (other than NZ as of next week). The economy is doing deceptively well due to pent up demand, but it’s not sustainable with the borders shut. There is more economic pain ahead and the Holgate saga is not going away.

Get out your popcorn, folks.