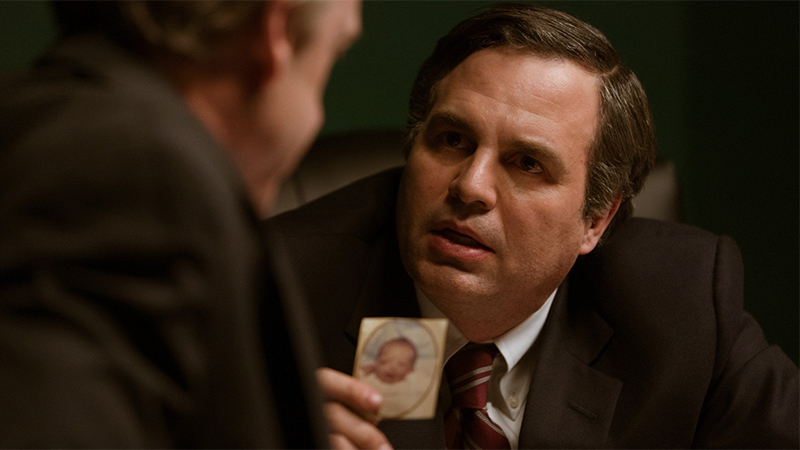 In Dark Waters, Mark Ruffalo plays Robert Bilott, a real-life corporate-defense attorney-turned-environmental crusader who took on DuPont, one of the biggest chemical companies on the planet, and successfully sued them for their hazardous dumping of toxic chemicals. Bilott’s transition from defending chemical companies to using his legal knowledge and relentless tenacity to hold them accountable for their actions is remarkable in modern legal history; it is the story of a mind enlightened and a conscience awoken that is made all the more intriguing because Bilott is portrayed as such an innocuous, mild-mannered man.

Steven Soderbergh’s Erin Brockovich (2000) told a similar true-life story of a polluting power company brought to justice by an unlikely hero, except the titular character played by Julia Roberts in her Oscar-winning turn was vivacious, fast-talking, and often very funny in her damn-the-torpedoes approach to pretty much everything. Bilott certainly has his emotional moments, particularly in a scene in which he gets the chance to interview DuPont’s evasive CEO at length and later when he thinks he has won only to discover that DuPont will simply refuse to honor its agreement, but on the whole he remains stoic in his steadfast determination to uncover the truth and hold the deserving parties responsible. In the process, of course, he becomes the defender of the underdog, the usually forgotten individuals whose lives are wrecked by corporate greed and malfeasance.

The primary underdog in this case is a no-nonsense West Virginia farmer named Wilbur Tennant (Bill Camp) who documents the physical ailments and death of all the animals on his farm after DuPont gains ownership of the land next door and he begins to see evidence of pollution in a nearby stream. Tennant approaches Bilott because he knows his grandmother; Bilott is initially reluctant to take the case, partially because he is a corporate-defense attorney, not a plaintiff’s attorney, and partially because, as a corporate-defense attorney, he knows that Tennant has no chance in hell of winning a case against a behemoth like DuPont, which has the resources to crush him with paperwork and legal fees without ever having to answer to any charges.

Yet, something about the case nags at him, and he eventually convinces the main partner at his law firm, Tom Terp (Tim Robbins), to allow him to take it on. The original agreement is that he will keep it limited to Tennant’s situation, but once he gets ahold of hundreds of boxes of DuPont’s internal documents (their plan to inundate him as a means of forcing him to give up backfires spectacularly), he is able to piece together an insidious narrative involving the chemicals Perfluorooctanoic acid (PFOA) and Perfluorooctanesulfonic acid (PFOS), which at the time were completely unknown even to chemists and toxicity experts outside of DuPont’s walls. He begins to trace a history of death and concealment, which shows that Tennant’s case is just the literal tip of a toxic iceberg dating back decades. The toil of his investigation stretches out over 20 years and takes its toll on his marriage (Anne Hathaway plays his wife, Sarah, who remains largely steadfast, but also has her limits) and his career, as he has little time to attend to other cases. At one point, he becomes convinced that DuPont wants to kill him, and there is a tense moment in a parking garage where he questions whether he should turn the ignition key on his car.

For the most part, though, Dark Waters is a more low-key legal thriller, composed of small discoveries that accumulate over time. Director Todd Haynes burst on the scene in the early 1990s as an idiosyncratic indie auteur with challenging films like Poison (1991) and Safe (1995), but has since settled into a career of arty-edgy studio films like the Bob Dylan biopic I’m Not There (2007) and the lush romance Carol (2015). He does little to upend the norms of the genre here, instead playing by the rules and relying on the inherent intrigue and attendant outrage of the true-life story to fuel the narrative and keep our interest (his work with veteran cinematographer Edward Lachman, who was nominated for Oscars for Carol and 2002’s Far From Heaven, fits the material well). Ruffalo is admirably restrained as Bilott, to the point that he risks making the character boring. Yet, he also conveys Bilott’s deep well of moral reasoning and conviction, which turns Dark Waters into a compelling character study as well as a parable about the importance of doing the right thing, even when it seems like everything is stacked against you.

COMMENTSThe 1080p/AVC-encoded image on Universal’s Dark Waters Blu-ray looks uniformly excellent. Although it would be easy to mistake this film for a run-of-the-mill True TV thriller, it is elevated substantially by the fantastic cinematography by multi-Oscar-nominee and regular Todd Haynes collaborator Edward Lachman. Much of the film is intentionally dark, with heavy shadows and grays dominating, and the transfer manages detail well in even the dimmest corners of the frame. The color palette is fairly restricted without a lot of bright, primary hues, and flesh tones look accordingly natural throughout. The DTS-HD Master Audio 5.1-channel soundtrack is also first-rate, with clear dialogue, nice separation in the surround channels, and a strong presentation of veteran composer Marcelo Zarvos’s musical score. The supplements are, unfortunately, a bit thin, with only three brief featurettes: ‘œUncovering Dark Waters,’ a 6-minute overview of the film’s production; ‘œThe Cost of Being a Hero,’ a 5-minute look at the real-life Robert Bilott and how actor Mark Ruffalo prepared to play him; and ‘œThe Real People,’ a 3-minute look at some of the people who were involved in the case and have cameos in the film.

Frantic efforts to rescue whales trapped on sandbars off Australia

CAIRO, Egypt – A Sydney man is imprisoned in...