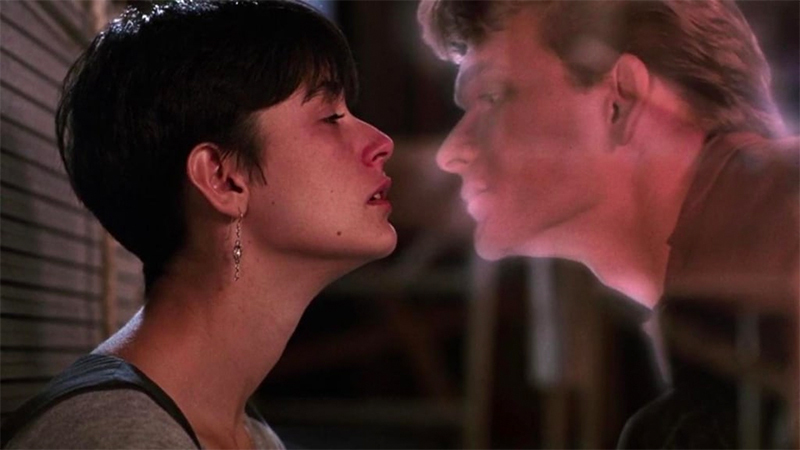 Ghost, the highest grossing film of 1990, was a unique and unexpected blockbuster stitched together out of an unlikely mix of genre traits, creative casting, and genuine earnestness. It opened in second place in the middle of July (behind Renny Harlin’s Die Hard 2), but quickly proved to have the kind of theatrical staying power that we wouldn’t see again until Titanic (1997). We have become so accustomed to blockbuster movies hitting huge right out of the gate and then being quickly replaced at the multiplex by the next must-see hit, that it is hard to conceive of a time when a movie like Ghost could stick around in theaters for more than a year, topping or nearly topping the charts on six different weeks and lingering in the top 10 for more than five months. When it was finally released on home video, it not surprisingly became the most rented film of 1991.Looking back on Ghost three decades later, it is difficult to pinpoint what exactly about the film caused it to be such a sensation. It is a good film, but hardly a great one, and perhaps its appeal lies precisely in its unlikely melding of disparate generic elements’”a film that literally has something in it for everyone. It has, of course, its iconic lovemaking scene involving a pottery wheel and The Righteous Brothers, a scene that has been parodied so many times in so many ways’”including by director Jerry Zucker’s brother David in The Naked Gun 2 Â½: The Smell of Fear (1991)’”that it becomes almost difficult to see it as anything other than a source of humor even though it stands on its own as a beautifully realized bit of big-screen eroticism. There are distinct elements of horror, especially in the final act, and the basic plot is a mystery, which doesn’t just balance out its melodramatic romance, but deepens and expands it.

The story centers on Sam Wheat (Patrick Swayze), a successful New York banker, and his girlfriend Molly (Demi Moore), who is an artist. They appear to live a charmed life in their massive, newly renovated Manhattan loft until one night Sam is shot and killed in the street, at which point he becomes the titular spirit, trapped on Earth where he is witness to the events that unfold after his death. He watches as his co-worker and best friend, Carl (Tony Goldwyn), and Molly try to cope with his loss, but things take a turn when he discovers that he was actually murdered and his killer (Rick Aviles) may pose a threat to Molly. He has no way of communicating with her until, by a stroke of luck, he happens upon Oda Mae Brown (Whoopi Goldberg), a con artist medium who, it turns out, can hear him perfectly well. Thus, Oda Mae becomes his voice and accomplice in solving his murder and trying to keep Molly safe.

There had been movies with similar storylines involving characters being somehow pulled out of their lives and watching their loved ones from afar, including Victor Fleming’s A Guy Named Joe (1943), which Steven Spielberg had remade as Always (1989), and Frank Capra’s It’s a Wonderful Life (1946), which hits a similar vibe in depicting a character watching, but being unable to interact, with an alternate reality in which he had never been born. Each film had its own take on the afterlife and interactions between humans and celestial beings, and Ghost keeps things relatively simple and familiar, giving us a slightly New Age-y vision of a heaven and hell and human souls trapped in limbo still on Earth, waiting to be able to go into the light and move onto the next dimension (it was reportedly influenced quite a bit by the psychologist Raymond Moody’s 1975 book Life After Life, which coined the term ‘œnear-death experience’ and helped popularized the imagery of entering the afterlife through a strong light). Sam crosses paths with a number of other ghosts played by veteran character actors, including Phil Leeds as a ghost in an emergency room who helps Sam understand life after life and Vincent Schiavelli as an angry, violent spirit who rides the subways and eventually teaches Sam how to move physical objects, a narrative conceit that the film unfortunately takes too far in its final third.

Screenwriter Bruce Joel Rubin has been trying to get the film made since the mid-1980s, and ironically 1990 saw the realization of not just Ghost, but also Jacob’s Ladder, another supernatural film he wrote about life and death’”albeit one that is distinctly more horrific’”that had taken years to get made. Rubin was a prolific screenwriter throughout the 1990s and early 2000s, writing or co-writing scripts for My Life (1993), which he also directed, Deep Impact (1998), Stuart Little 2 (2002), The Last Mimzy (2007), and The Time Traveler’s Wife (2009), although he not written anything since then. He won an Oscar for Ghost, and the film was nominated for four others (including Best Picture), with Goldberg taking home a statue for Best Supporting Actress.

Interestingly, Ghost succeeds largely due to its casting, even though most of the main actors were unlikely choices. Patrick Swayze had certainly secured his romantic bona fides three years earlier with Dirty Dancing (1987), but otherwise he had starred almost exclusively in rough-and-tumble action films like Red Dawn (1984), Steel Dawn (1987), Road House (1989), and Next of Kin (1989). Demi Moore had had significant roles in St. Elmo’s Fire (1985), Wisdom (1986), and The Seventh Sign (1987), but she was at the time an emerging star with no proven box office clout (her most recent film had been the 1989 Robert De Niro/Sean Penn bomb We’re No Angels). And Whoopi Goldberg, despite her phenomenal debut performance in Steven Spielberg’s The Color Purple (1985), had starred mostly in fast-paced action comedies, including Jumpin’ Jack Flash (1986), Burglar (1987), and Fatal Beauty (1988) (the one outlier was the 1987 drama Clara’s Heart). Yet, it is now hard to imagine the film with any other actors in those roles, as they developed a palpable, multidimensional chemistry, with Swayze and Moore generating real romantic heat that can bear the weight of his character’s death and Swayze and Goldberg creating an amusing and moving odd-couple friendship that gives Goldberg multiple opportunities to deliver funny one-liners, comebacks, and argumentative quips. She constantly threatens to soar right over the top, but somehow never does.

Strangest of all, though, was the film’s director, Jerry Zucker, who up until that point had only helmed the broad, farcical comedies Airplane! (1980), Top Secret! (1984), and Ruthless People (1987). There had been no indication that he could direct an earnest romantic fantasy, but he proved otherwise, nimbly balancing the film’s many tones and working with veteran cinematographer Adam Greenberg (The Terminator, Near Dark) to give the film a slick, but not overly polished look. Some of the plot points clunk a bit, and the film’s sincerity comes dangerously close to schmaltz on more than one occasion, but overall Ghost works (and continues to work) precisely as it was intended to.

COMMENTSGhost had previously been released on Blu-ray back in 2008, but this new ‘œParamount Presents’ Blu-ray features an all-new high-definition transfer from a recent 4K restoration. I have not seen the 2008 Blu-ray, so I can’t make direct comparisons, but I can’t imagine that it looked better than what we have here. The image is very nicely rendered with a good sheen of grain to remind us of the film’s celluloid origins. The image is just a bit soft in keeping with the look of films from its era, but fine detail remains impressively clear and precise. Colors look good, although not much really stands out in this regard beyond the ethereal final shots and Whoopi Goldberg’s garish pink suit. The Dolby TrueHD 5.1-channel, which appears to be the same one from the earlier Blu-ray, soundtrack is quite good, as well, giving Maurice Jarre’s musical score and the pointed use of the Righteous Brothers’ ‘œUnchained Melody’ plenty of room to work. Some of the sound effects, such as the lightsaber-like reverberations that accompany Swayze trying to move something, offer some nice directional and surround effects. In terms of supplements, as with the other ‘œParamount Presents’ titles, there is not much new here save a 7-minute featurette titled ‘œFilmmaker Focus: Director Jerry Zucker on Ghost.’ In it, Zucker reminisces about the film’s production, telling some familiar stories and touching on the most memorable aspects of the film (including its early use of digital effects). The rest of the supplements all previously appeared on the 2008 Blu-ray, and most of those had been ported over from the 2007 Special Collector’s Edition DVD. There is a good audio commentary recorded together by Zucker and writer Bruce Joel Rubin, which was originally recorded for a 2001 DVD; ‘œGhost Stories: The Making of a Classic,’ a 13-minute retrospective featurette that includes interviews with most of the film’s major contributors, some of which are circa 2007 and some of which were recorded at the time of the film’s release; ‘œAlchemy of a Love Scene,’ a 6-minute featurette about the film’s infamous pottery wheel scene; and the original theatrical trailer. Those with the earlier Blu-ray should take note that a few of the supplements from that disc, including a photo gallery and the featurettes ‘œInside the Paranormal’ and ‘œCinema’s Great Romances,’ have been left out here.

This year is on track to be one of...