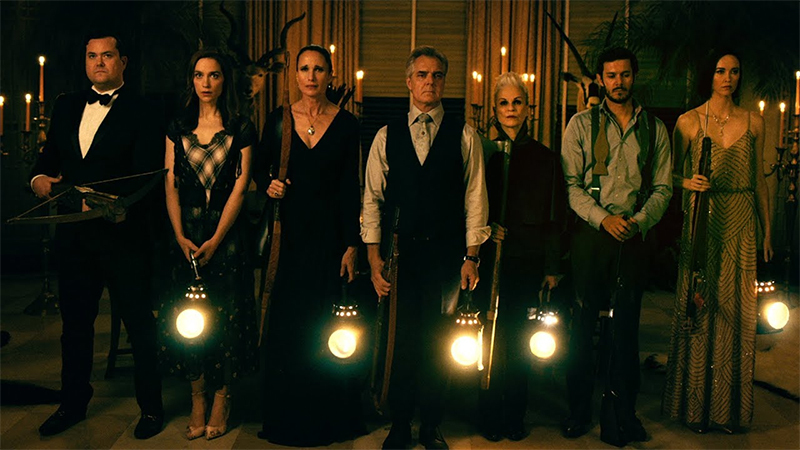 Ready or Not takes place entirely in and around a massive country estate owned by the Le Domas family, which made its multi-generational fortune with popular board games. The estate is the site of the wedding between Grace (Samara Weaving), who has no family of her own, and Alex (Mark O’Brien), the youngest of the Le Domas siblings who has been something of a prodigal son before tentatively stepping back into the fold. Grace is aware that Alex’s family is a bit strange’”aren’t the extremely wealthy always a bit ‘¦ eccentric?’”but she really has no idea what she’s in for after the nuptials are finalized and she learns that the family has a game night tradition whenever someone new enters the family that can be nothing short of deadly.

As a satirical horror-thriller about the grotesque perversities of the ultra-rich, Ready or Not hits the proverbial broad side of the barn with a ruthless sense of glee that is at times infectious and at other times desperate in its desire to be as funny as it is bloody. It isn’t hard to see where things are going fairly early on, although screenwriters Guy Busick and Ryan Murphy keep a few crucial details close to the vest, including the overall goal of the family game night and whether there is a true supernatural motivation or if they’re all just dupes of a fictional family curse (the devilish nature of a lot of their board games would seem to suggest the former).

In the meantime, we get a good cast of character actors adding color to what is essentially 90 minutes of hunting the most dangerous game, including Adam Brody as Alex’s cynical brother Daniel, Henry Czerny and Andie MacDowell as the respective patriarch and matriarch, Melanie Scrofano as Alex’s coked-up sister, and Nicky Guadagni as a malevolent aunt with a thousand-yard scowl. The film was directed by Matt Bettinelli-Olpin and Tyler Gillett, whose only previous feature film collaboration was the low-rated supernatural pregnancy thriller Devil’s Due (2014), and it basically plays like Clue with a much higher body count and a twisted sense of humor (many of the means of death are amusingly reminiscent of the murder weapons in that famous Parker Bros. board game). There are some genuinely clever moments scattered throughout the film (cinematographer Brett Jutkiewicz’s camerawork is jaunty and fun), and Samara Weaving makes for an engaging protagonist who must morph from elated, glowing bride to battered survival-warrior over the course of a night (her wedding dress looks like John McClane’s undershirt by the end of the movie). Much blood is spilt and many quips are made as the absurdities pile up, although it never really adds up to all that much.

Day raring to go ahead of PGA Tour return in Texas

With just one week to go before the PGA...

Spinners have chance to shine during saliva ban – Kumble

SYDNEY – The coronavirus shutdown and the summer bushfires...

All Blacks legend Dan Carter announced his return to...